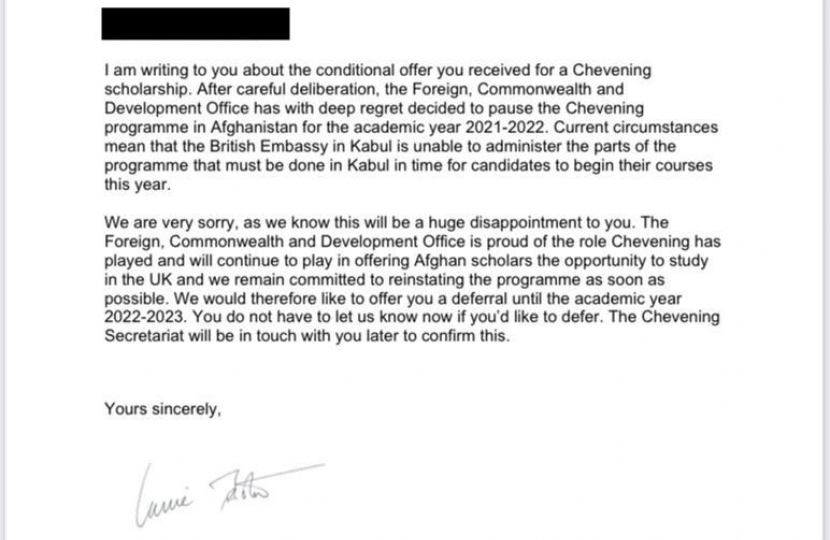 Members and friends of the Conservative Friends of Afghanistan have been following the plight of the 35 young Afghans previously awarded Chevening Scholarships for the coming academic year who are now to be denied the opportunity to take up their places. They were informed on 6 August that there was an inability to process their visa applications in the British Embassy in Kabul having previously been reassured as recently as two weeks prior, that their places were still valid.

We have shared a copy of the letter one awarded received, which has been widely shared on social media. We understand all of the cohort have received similar correspondence.
 

On 11 August, a group of the scholarship awardees attended a meeting with embassy staff to request the matter be given further consideration or that alternative arrangements might be made for visa processing in a third country. As we understand the reports, those requests were rejected. However, many Afghan visas were already being processed in Pakistan and this seems to remain the best route for the scholars.

Chevening Scholarships are a stand out example of the mechanisms through which we can taking forward "our vision of a truly Global Britain...  leading by example as a force for good in the world", as the Foreign Secretary wrote in 2019. There is surely no area of the globe more in need of that today than Afghanistan and with the United Kingdom’s world class universities and established understanding of the benefits they bring to the UK and to the countries of students birth, this is an area we should be pushing faster, not hobbling, despite the obvious difficulties of necessary administration.

These are individuals of enormous potential value to their communities and to the U.K., who have already undertaken a difficult application process, medicals and been found to have sufficient academic skills and hunger to be awarded a place by their host institutions. One young man had a place on a well-respected course in  intelligence and security studies, something that combined with his personal experience, could be of enormous value in our handling of local conflicts in the years to come. Others have been offered places at UCL, Oxford, UEA and ten other major universities.

We are asking that the decision not to process the visa applications of the Afghan Chevening Scholarship awardees is reviewed immediately. The involvement of these individuals in a U.K. programme may place them at additional risk under Taliban rule. The U.K. has a moral duty to honour the awards made.

We want them. They need us. The Afghan scholars should be awarded visas immediately while there may still be time.